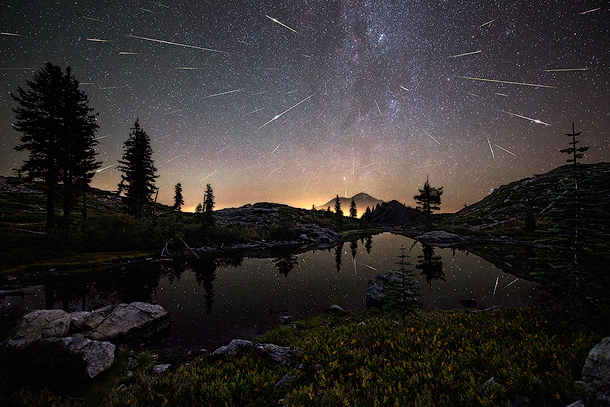 The peak of the 2015 Perseid Meteor Shower occurred in the early morning hours of August 13th. Needless to say, if you saw it from a clear, dark location, it certainly did not disappoint. I saw roughly 3-5 meteors per minute with beautiful, green glowing trails. The image above is a composite of all the meteors I captured from Mount Shasta, CA. All of the meteors were captured from 12:30am – 4:30am and the composite contains roughly 65 meteors. The large mountain in the distance is Mount Shasta and the glow from the base of the mountain is from the city lights of Mount Shasta. See a larger version of the image HERE.

Here’s also some technical detail about the photo:

I subtracted the meteors from the images that contained them throughout the 4 hour period. Due to the Earth’s rotation, the meteors were not in the correct location once overlayed with the single background image. To find where the meteors originated from in relation to the background image, I used Polaris (North Star), Capella, Pleiades, Mirphak, Double Cluster, and the constellation Perseid to triangulate their position.

The next meteor shower comes in October called the Orionids. Check out the Meteor Shower Calendar for more info.

One Response to Perseid Meteor Shower