Time to rewind a bit…

There has been so much going on lately with entering competitions, completing business tasks, re-modeling my website, and the constant ‘go-go-go’ of chasing the light and clear skies. I’ve been banging my head for the past couple of months saying to myself, “I’ve got to write about my Arches trip!” So here I sit, almost 3 months later, with so many stories to write about and so many images to share with you. Instead of me rambling on about my trip, line for line, I’m going to share with you my favorite images and write about my story behind them.

I did a fair amount of research before planning this trip with my Dad. Google Earth gave me a good idea about what I was getting myself into and a conception of what I wanted to photograph. I bought a local map at REI and began highlighting every trail and arch I wanted to hike and possibly shoot. Dad didn’t really know much about the park, except how to get there, so the legwork was up to me. During my research about Arches National Park, I discovered the area has over 2,000 natural arches, and humans have occupied the region since the last ice age, nearly 10,000 years ago. Arches NP is also home to one of the most famous geological rock formations in the world called, “Delicate Arch.” This famous sandstone landmark is a 52-foot tall, freestanding natural arch, and is the most widely recognized historical landmark in the Park. It is depicted on Utah license plates and on postage stamps commemorating Utah’s centennial anniversary of statehood in 1996. 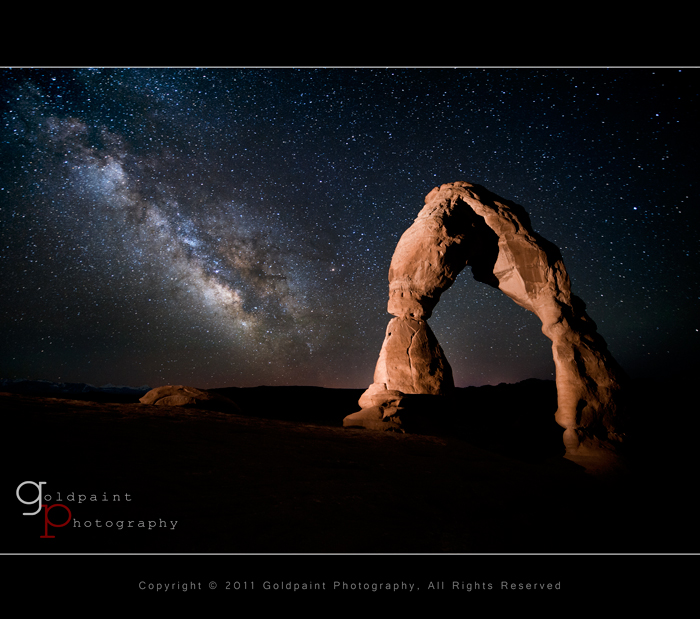 The first day we arrived in Arches, I decided to try my luck and headed up to the Delicate Arch for a chance at some night sky photography. I arrived at the trailhead as the sun was setting, and on my way up the 1.5 mile strenuous hike, I easily passed 300 tourists’ hiking down from the arch and its vantage point.  Fortunately, I was the only one hiking up because this trail was no joke. It climbed in elevation up 480 ft within 1.5 miles. With my too-heavy pack full of camera gear, it easily felt like I had ascended 1,000 ft. up for least 3 miles.  I do not recommend you hike this trail in the dark because the clear, dirt path quickly became solid rock. Thankfully, there were Cairns (rock piles) to help guide the way. As I finally reached the top of the mountain, I set my first sights on the arch and I was literally speechless! She was stunningly beautiful in rich color and texture. The distant surroundings and landscape also created this intimate, Zen-like experience for me. Unfortunately, 8 additional photographers were attempting night-sky photography at the arch, so I quickly realized I couldn’t capture a shot with everyone around. My plan was to try ‘light painting’ on the arch, for a simple silhouette was not going to be sufficient. After a couple hours of experimenting with different comps and trying to avoid other photographers, I decided to leave and try my luck somewhere else. 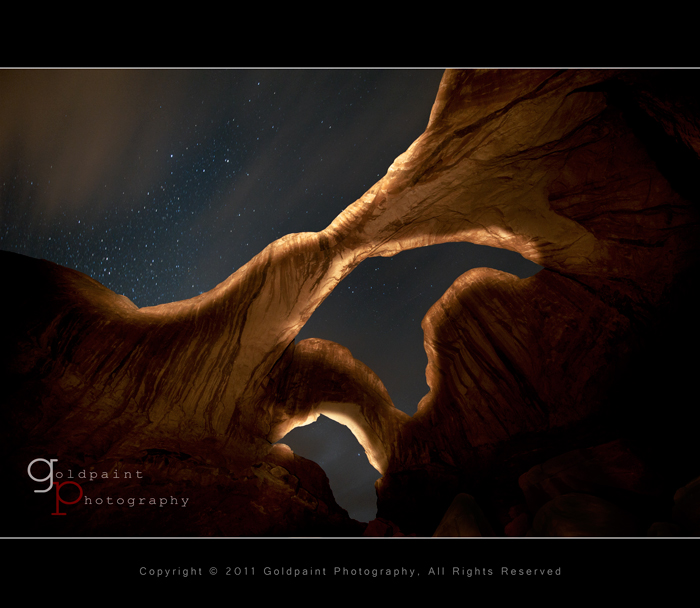 ‘Double Arch’ was also on my list to shoot, and somehow I did not feel tired after the 9 hour drive. I decided to head over, hoping I would run into fewer crowds than at Delicate. Unfortunately, clouds began to move in and the stars disappeared as soon as I arrived at the pair of arches. I decided it would be a good time for some test shots since I was fortunate enough to be alone with the monument. The above image was a ‘light painting’ test that brought out the detail, color, and contrast in the Navajo sandstone. 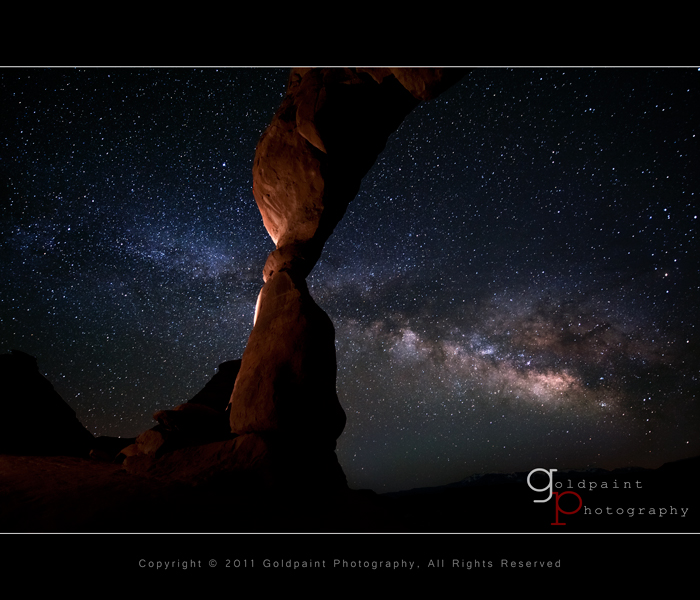 Over the next few days I hiked around the crowded park with my Dad and saw some amazing places. We hiked up to Delicate Arch again during the day, along with the massive crowds of sightseers, and took a tour through Fiery Furnace. This trail is a maze of sandstone fins and slot canyons between the Delicate Arch turnoff and Devils Garden area. After a full day of hiking, it looked to be the clearest night of the trip so far, so I told my Dad it was time to make my move and pull an all-nighter of shooting. To get the best shots, I planned my ‘vacation’ around the new moon and the conditions could not have looked better. I eagerly packed my camera gear, some tasty snacks, all the charged batteries I could carry, and left the RV Park around 10:00 pm. I arrived at the Delicate Arch trailhead around 11:00 pm and started my trek up. Although the night was pitch black, this was the third time hiking up this trail so I felt very comfortable exploring it alone. As luck would have it, I arrived around midnight and had the most famous arch in the world all to myself. Naturally, I took advantage of the solitude for as long as possible. 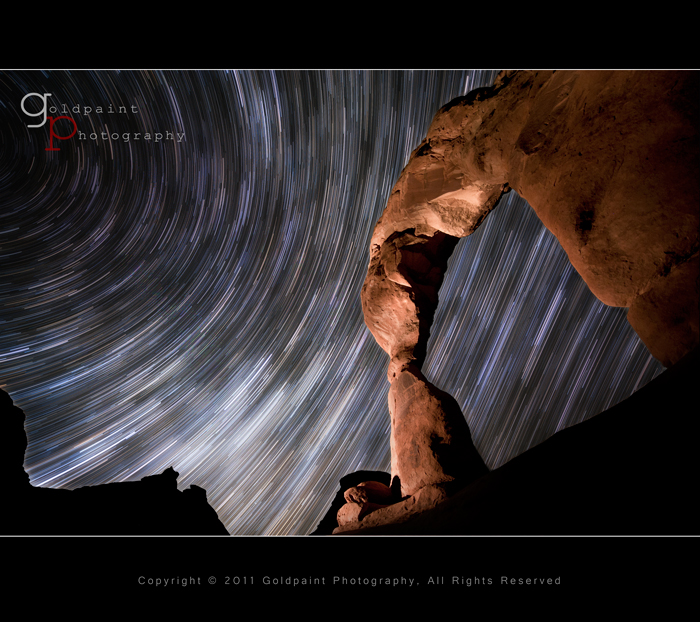 As I patiently waited for the Milky Way to rotate into position, I decided to begin a star trail series. I found the comp I was looking for, set up my camera gear, and sat back to enjoy the stars and satellites passing across the night sky. Small desert mice conspired around me to steal my snacks and kept me company with their reconnaissance missions. Surprisingly, my iPhone had 3g service so I was able to make calls and catch up with my friends about the trip. When I spotted the Milky Way bursting out of the horizon around 1 am, it was time to play! The image above was captured and created by stacking 100 images together and artificially ‘light painting’ the arch. 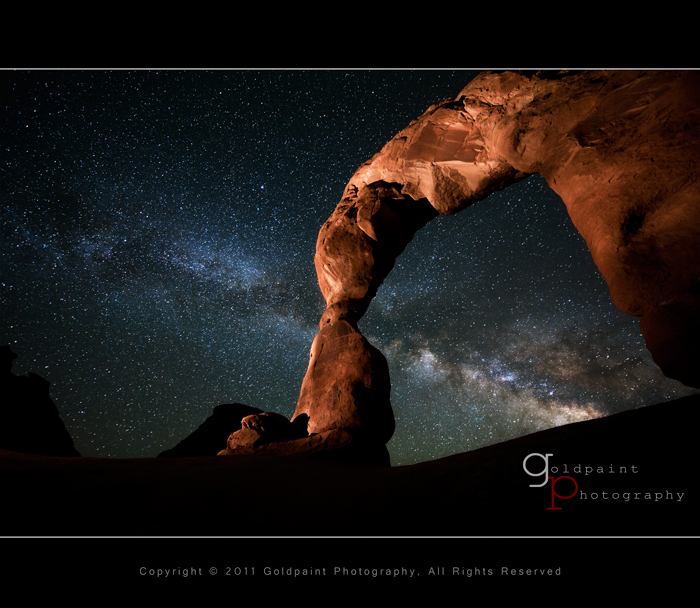 From the moment I saw this particular arch in pictures on the internet and in travel or landscape magazines, I have been fascinated with its narrowest point.  The entire monument is supported by a tiny and narrow piece of twisted sandstone. As I stood under the arch in the middle of that starry night, I could faintly hear tiny bits of sandstone crumbling to the dry desert floor. What an eerie feeling, knowing this towering form could crumble at any moment.  Around 2:30am, the Milky Way finally positioned herself to the perfect place I had been waiting for. The image above became my masterpiece because from a compositional standpoint, it looked like an opened gateway inviting the viewer to enter into the unknown.  It took a lot of patience, waiting for the Milky Way to intersect at the narrowest point of the arch, but I believe it was well worth the wait. 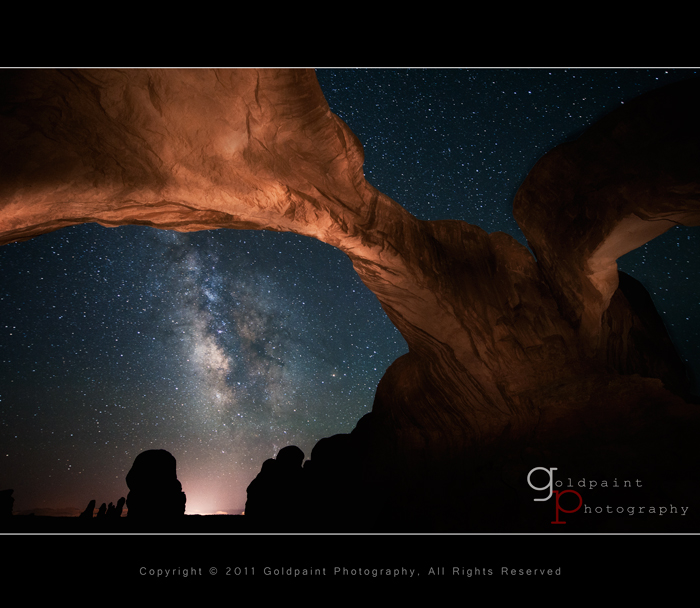 After shooting at Delicate Arch for a couple of hours, I decided to keep my inspirational energy going and quickly headed towards Double Arch. It was already 3:00 am so I had just 2 hurried hours before the sun started its daily rise and obscuring the stars. I began walking down the hill in pitch black darkness, and before long, I was half jogging and half stumbling. When I arrived, out of breath at the Arch, I was relieved to find not one other person there. Perfect solitude! I quickly began experimenting with multiple compositions because the position of the Milky Way was perfect. I loved how the arch framed the galaxy and the distant monoliths provided an unearthly feel to the finished image. As most of you know, this photograph was featured in National Geographic’s Daily Dozen, NASA’s Astronomy Picture of the Day, and Earthshots.org Picture of the Day. To see the publications, click HERE. 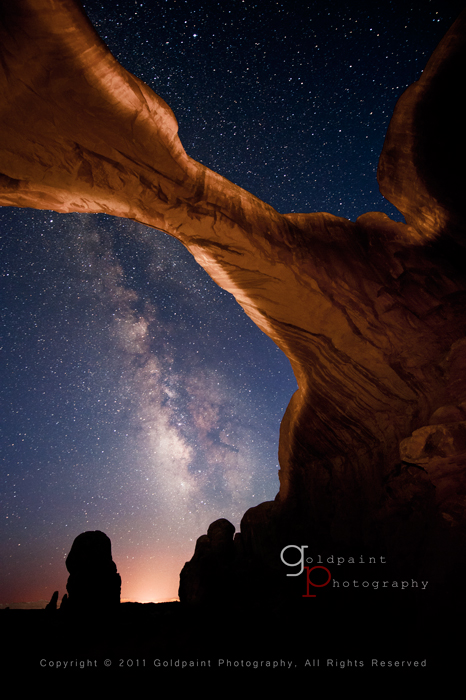 After several more comps, the sun began her slow ascent and the stars faded to tomorrow. In my experience with pulling all-nighters, this was my most successful because I came back with so many ‘keepers’. I’m already looking forward to, and am excited to go back and visit Utah again soon.  Hiking all night in darkness and in the heat of the day with crowds was well worth the effort to experience the Milky Way in the desert. On a side note, Arches is open 24/7 and you can enter and exit as you please, but camping is not permitted within 2 miles of any named arch or trail. Please respect these fragile formations so others can enjoy in the future. If you would like to see more images from Arches National Park, click HERE.

“There are several ways of looking at Delicate Arch. Depending on your preconceptions you may see the eroded remnants of a sandstone fin, a giant engagement ring cemented in rock, a bow-legged pair of petrified cowboy chaps, a triumphal arch for a procession of angels, an illogical freak, a happening…. If Delicate Arch has any significance, it lies; I will venture, in the power of the odd and unexpected to startle the senses and surprise the mind out of their ruts of habit, to compel us into a reawakened awareness of the wonderful-that which is full of wonder.”
– Edward Abbey, noted naturalist and author

Thank you for reading and hope you enjoyed!

21 Responses to Arches: Portals to the Night Sky