X-class!!! After reading reports from various news stations on July 12th, I knew there was going to be a strong chance of capturing the aurora over Central Oregon. Almost a month prior I had captured the aurora over Crater Lake (see HERE) by pure coincidence while teaching a workshop. This time I planned to be out in the high country to ensure I was in the right place, at the right time. No one can accurately predict where auroras are going to be visible from Earth, but what I can do is look at reports from sites like spaceweather.com & softservenews.com, make sure I’m in an area with very little light pollution, a clear view of the night sky facing north, and cross my fingers. If you look at the diagram above, you’ll notice there are different levels of aurora activity covering different locations in the US & Canada. This diagram tells us if KP levels are at level 3, aurora activity can most likely be seen in Canada and Alaska, but probably not below the blue line. If the levels are at KP 7 for example, then there’s a strong chance certain areas in Central Oregon may see some northern lights. I looked at the reports coming from Spaceweather and Softservenews, and KP levels were showing as high as 8 throughout the day. I felt there was going to be a strong chance for spotting an aurora and all I needed was a good location to plant myself for the night. I had spent time at Sparks Lake in Central Oregon a few times teaching workshops, and remembered it had a great orientation facing directly north. Sparks Lake sits in the middle of the Cascades and has an incredible view of the South Sister and Broken Top Mountain. I had just finished my latest time-lapse video, ‘Within Two Worlds’ and chose to setup and take photos all night just in case the sky exploded. 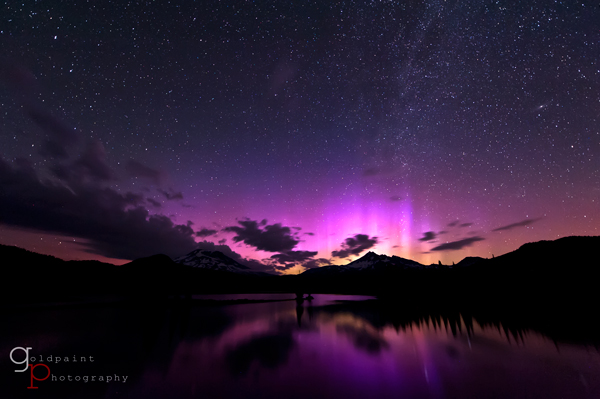 I arrived at Sparks around 8pm on July 14, 2012, just as the sun was setting. I kept a constant eye on the KP levels which were still looking promising, around KP 6-6.5. Once the skies got dark, my camera started picking up a faint, pink glow near the horizon. The clouds started creeping in, (see the time-lapse video above), and I started getting very excited. When I’m out shooting all night, I have a lot of time to think. If I’m out there and things (weather, clouds, lighting, clarity of the night sky, etc.) are not going my way, I begin to doubt the location and/or composition. Doubtful thoughts start racing inside my head, “Should I move? Maybe go somewhere else? I wonder what it’s like 50 miles north from here?” With time-lapse photography, I can’t just pick up and move. I am committed to staying put and if my camera moves, the sequence is finished and I have to start all over. At 12:45am on July 15th, KP levels shot up to 7.2, clouds started to thin, and the sky suddenly exploded directly behind Broken Top. This first burst of light lasted a mere 20 minutes-but it wasn’t the last. 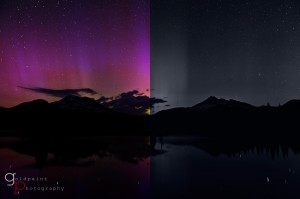 After the first beams of light started to vanish, I quickly changed lenses and the composition, in hopes of getting a closer view of the mountain peaks of South Sister and Broken Top. Already satisfied and in complete disbelief of what I just witnessed, I changed the batteries, set up my camera for the next sequence, and relaxed with a big smile on my face. Later, I recall receiving a lot of questions as to how bright the auroras were. The questions are actually fairly easy to answer. I’ve created a comparison as to what I saw versus what the camera captured. It seems like two different worlds doesn’t it? This is due to the long exposure that my camera was taking. As I said before, our eyes cannot see what the camera can. The camera is taking in data anywhere from 10-30 seconds of exposure and placing all that information into one frame. Our eyes do not have the capabilities to do so. However, the beams were so bright, I could see the streaks of light shoot up from the horizon towards the heavens just like I’ve illustrated on the right side of the image above. The magnitude of colors and lights were like I’ve never seen before. 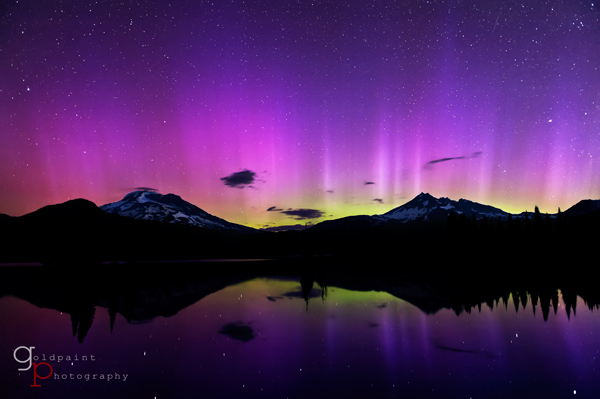 By 2:30am, my efforts and dedication began paying off. The sky exploded!!! A large, thick band of light burst out of nowhere just behind South Sister and slowly drifted all the way to Broken Top and beyond. Immediately after words, the entire sky filled with thin bands of light. I could barely make them out with my own eyes, but my camera picked them up perfectly.  The majority of light bands lasted until 3:30am, just as the sun began to rise.

This was by far one of the most unforgettable experiences I’ve ever witnessed and feel this is why I’m so drawn to photography. However, for me, it’s not just about getting the shot, although it was a plus, it’s about escaping my comfort zone and challenging myself to experience something entirely new. I often hear about people who are scared of the dark and would never think about doing what I do. Would you believe me if I said I was afraid of the dark too? Every time I’m out there I get a good scare from a sound I don’t recognize. I believe it’s about conquering one’s fears and allowing your eyes to become your guide.

To clear skies and sleepless nights,

Don’t forget, limited edition, fine-art prints are available and can now be ordered through the online store! Visit goldpaintphotography.com/purchase for more info.

8 Responses to In Plain Sight