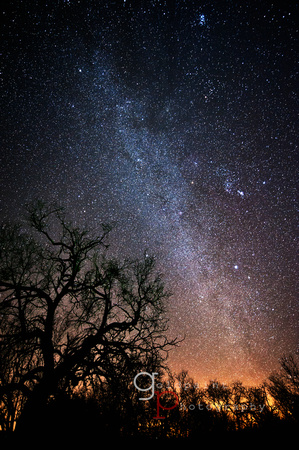 At first, when I set out to do another time-lapse video I knew it was going to be extremely difficult, maybe even impossible to beat the last one I did.  I was supposed to leave Dallas on a Tuesday, but due to the Arctic Storm that swept through the Midwest, I was delayed by 4 days. This was not ideal because we were experiencing a new moon, which basically means no moon during the storm, but trust me it was impossible to leave.  It was the first time I have experienced a ‘sleet storm’ and I now understand why people have to stay indoors and can’t drive anywhere for days and days.  Ice covered every inch of the roadway and no one was going anywhere.  By Saturday, I finally broke away from the ice and snow and headed to Brownwood, TX. My in-laws own a farm that I could stay at before getting to Big Bend National Park.  The farm produced some images of the Milky Way that I am quite happy with, even though the clouds were coming in and the weather was around 20 degrees.  You have to be careful with your gear in temperatures like this because you don’t want your camera to go from 70 degrees to 20 degrees too quickly.  I put my camera in a bag and let it sit outside before I turned it on to let it adjust to the freezing environment that I was shooting in. As expected, the moon was already becoming a factor and the clouds were starting to come in.  The orbit of the Milky Way was also different than the previous time I was there.  It spanned from horizon to horizon right when the sun had set, but immediately fell to the west within a couple of hours.  By 4:30am, it would grow from the east horizon, but then quickly fade within the coming hours due to the sunrise.  The picture to the left was taken at the farm, and I really like how the light pollution near the horizon adds an unearthly quality. 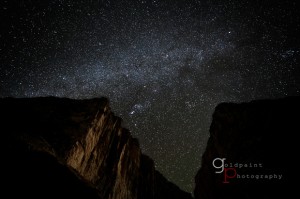 Monday morning I started on my 7 hour drive to Big Bend National Park.  On my way there, I saw so much roadkill that I was starting to get a little nauseous. Most of the roadkill consisted of skunks and deer, but there were some coyotes, armadillos, birds, cats, and some other things that I couldn’t make out driving past at 75mph.  After arriving at Big Bend, I was told I had to go to the ranger’s station to check in and obtain a permit for where I was camping.  Now, I was a bit thrown off by this because they wanted to know exactly where I was going to be every single night. I told them I wanted to be at Santa Elena Canyon to do some time-lapse photography throughout the night.  They began to tell me that camping near that area was illegal and I was not allowed to do it.  I then responded back to them with a little, “I’m not camping there, I’m just taking pictures there all night long.” They didn’t like this and warned me that if I was caught sleeping there, they would ask me to leave.  What kind of place does this?  Who the heck knows where they are planning to camp every night?  I never plan this far ahead and wasn’t going to start here. I parked at the trail head of Santa Elena Canyon around 6pm and waited for the sun to go down.  The moon was very bright and already putting a damper on the Milky Way, so I had to wait for it to set behind the canyon before I started shooting.  I loved the composition that Santa Elena was producing and I was able to get it so that the Milky Way would set right through the cracks of the canyon.  Although it is really short, as compared to my previous time-lapse video, I am pretty happy with the results. 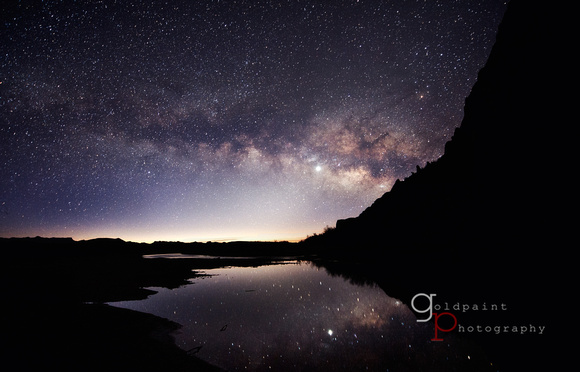 After the Milky Way had set behind the canyon I kept shooting for a few more hours.  As I looked to the east around 4am, I saw that the Milky Way had snuck up from behind me and I quickly realized I had missed my opportunity for a shot I had been dreaming of for the past couple of years.  It has always been a dream of mine to capture the Milky Way near a horizon and reflecting off of a water source; therefore creating a double Milky Way effect.  The picture to the left was taken just before the sun started to peak through the horizon and I only wish that I saw it sooner.  This was the only attempt I was able to have at trying to get this specific shot.  The next day when I returned to this location, the wind was raging through the canyon and clouds were taking over the sky, making it impossible to try another.

The second part of the time-lapse was created at another location after a failed attempt of dealing with freezing temps, lots of clouds, and winds that were blowing up to 30mph.  Usually, I camp out in the middle of nowhere, set my tripod and camera up, and pass out without worrying about my gear.  In this case, I set up all my gear, tried to sleep in my car, and since no one was around, wasn’t worried about anything getting stolen. The unfortunate side of it was that I had to wait until the moon had set and the clouds had disappeared.  The moon was already a 1/4, and the window of opportunity was quickly fading.  Although the sequence is really short, it did produce some of the clearest views of the Milky Way that I have been able to capture yet. The image below was taken around 6am, just before the horizon would start to change from the rising sun.

I hope you enjoy the new video as well as all the still shots that I was able to get in between working on the video.  I will be posting a new entry this week with regards to more on ‘Galactic Trails’ from Big Bend so stay tuned!

To see more of my Night Sky images click HERE!

If you like what you see here, subscribe to my blog at the top of the page!

Thank you all for your continued support!