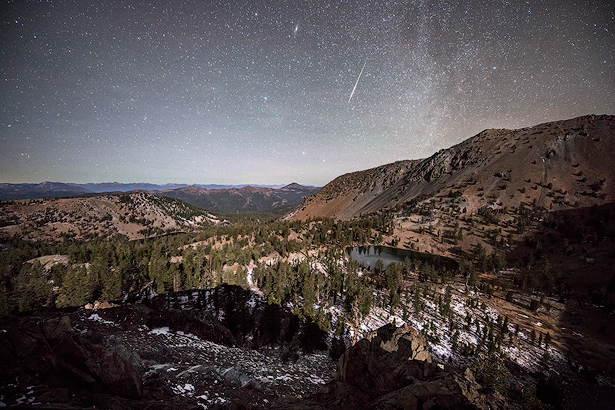 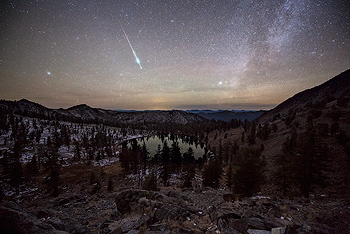 The change in seasons started when the summer’s last heat and the fall’s first chill met. From here on out, the temperatures begin to drop and days start to get shorter than the nights.  In the mountains, we’ve had a long stretch of below-freezing temperatures at night combined with days of cooler temps. So as I hiked into Deadfall Basin, near the base of Mount Eddy, it seemed the landscape was just at the verge of trying to silently explode with vibrant colors of reds, golds, and oranges. The anticipation of temperatures dropping near the teens shortly after sunset was obvious to my back as I labored up to the top with a pack full of layers like wool and down clothing, sleeping bags, and a heavier double-walled tent. As early darkness progressed, the clouds that teased me all day finally cleared to reveal the crisp and clear views of the night sky. This allowed me to set up a time-lapse above Upper Deadfall Lake, just below the steep summit lightly dusted by a fall storm from 6-11pm. During the late show, my camera caught a massive fireball radiating from the constellation Taurus, and also produced a persistent train. No amount of layering at these frigid temperatures can offer much comfort except for hunkering down in a thick sleeping bag after a hearty hot meal. Begrudgingly, I left the luxury of my shelter around 11pm to climb above the basin and set up another time-lapse. I could hear falling rocks echoing around the blind walls as even large nocturnal wildlife searched for warmer quarters.  This second location was perfect to take advantage of the rising moon which illuminated the transitioning landscape around 2am. Another massive meteor radiated from Taurus and again produced a persistent train that seemed close enough to grasp.  The longer autumn nights offer ample opportunities to shoot however; I welcomed the warmth of the morning sun reflecting off the frozen crystalline lake as I made my way back home, to a warm crackling fire and hot shower.

You can see the time-lapse video and a closeup for the persistent trains below. 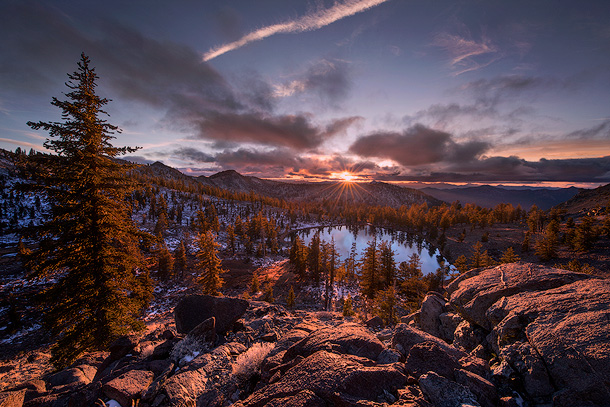